5 Most Innovative Solar Installations in the World

5 Most Innovative Solar Installations in the World

Major advancements in solar technology have been made across the globe and show no signs of slowing down as the industry continues to mature. Along the way, there have been a few installations that pushed the envelope and made solar a reality under surprising circumstances and in unexpected locations. Here are five of the most innovative solar energy installations in the world.

Located on a Tibetan Plateau in China, the Longyangxia Dam Solar Park array holds a record 850 megawatts (MW) of solar power, as it has grown over the years. The array is the size of a small town at 27 square kilometers; it is made up of 4 million photovoltaic (PV) modules, and will be able to power over 200,000 homes. Revealed just last month, the Longyangxia Dam Solar Park surpasses the size of the Kamuthi array in India, which had previously been the world’s largest solar farm since its completion in 2016 at 648 MW.

England is currently home to the world’s largest floating solar farm, located on the Queen Elizabeth II reservoir at Walton-on-Thames. The farm contains 6.3 MW of solar power and is made up of 23,000 solar panels, which took about $8 million in funding to construct. Thames Water, the utility which owns the array, claims that the farm covers around a tenth of the reservoir and will be able to power about 1,800 homes annually. However, this array will soon take second place for the world’s largest floating solar farm once Japan’s is complete. Japan began work on a floating solar farm about one year ago—to be complete in 2018—that will have a solar capacity of 13.7 MW and have the ability to supply enough electricity for close to 5,000 homes annually. 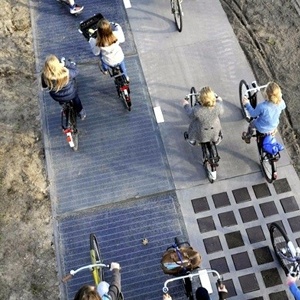 Completed approximately a year ago in the Netherlands, SolaRoad is the world’s first solar powered bike path. It runs 230 feet long and has already generated more than 3,000 kilowatt-hours (kWh) of energy (enough to power a home for one year). The solar electricity generated from the bike path array goes to the electricity grid and powers things like street lights and traffic systems. Six months after opening, more than 150,000 bicyclists had already used the road—and the panels are holding up well, covered by a thin layer of skid-resistant tempered glass. However, the path is currently in the middle of a three-year testing cycle, so it is unknown what will become of it in the future. 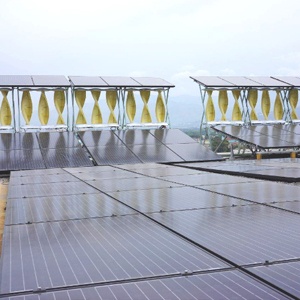 Kingston, Jamaica, is currently home to the world’s largest wind-solar hybrid farm. Completed in 2014 by Indiana-based WindStream Technologies, it is an 80kW installation located at Myers, Fletcher & Gordon, a law firm, generating more than 106,000 kWh annually (25 kW of wind and 55 kW of solar). The law firm is expected to save more than $2 million in energy costs over the course of the installation’s 25-year life span. 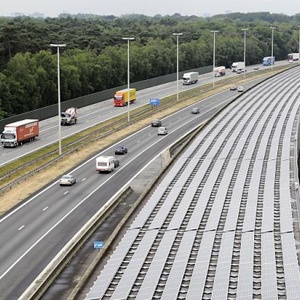 The world’s first solar tunnel, created in 2011, is located in Belgium on the Paris-to-Amsterdam line, powering Antwerp station. More than $15 million was needed to fund the project. The 2.2-mile-long tunnel crossing contains 16,000 solar panels covering 50,000 square meters. The panels produce 3.3 megawatt-hours annually, which is enough to power 4,000 trains. Belgian renewable energy company, Enfinity, installed the panels, which they claim decreases carbon emissions by 2,400 tons each year.