How to Read your Electric Bill: Part I

How to Read your Electric Bill: Part I

If you are a business owner, homeowner, or even an apartment renter, you have the joy of receiving a monthly electric bill. And if you’re like most people, you probably don’t give a second thought to the itemized charges; simply glancing at the total figure, paying it, and getting on with your life.

The next time you receive your electric bill, give it a thorough read-through. You’ll see a list of individual charges that make up your total cost of energy.  Not sure what you’re looking at or being charged for? You’re not alone. Let’s take a look at what comprises your electric bill and what all those line items and charges mean.

Electricity is measured in kilowatt-hours (kWh), and most charges are calculated with a rate per kWh, which changes based on what type of entity is consuming the power (i.e. residential versus commercial). To find the rate that applies to your bill, you can visit your utility company's website (we found National Grid, Eversource, and Unitil rates for you).

A standard electric bill is divided into two parts: delivery and supply. Delivery rate is the fixed cost set by the utility to cover the transportation of energy from their generation site to the consumption site. This includes upkeep of power lines, natural gas pipelines, transformers, and other physical equipment.

As seen in the segment of the commercial electric bill below, there are multiple itemized charges that make up the total delivery charge. 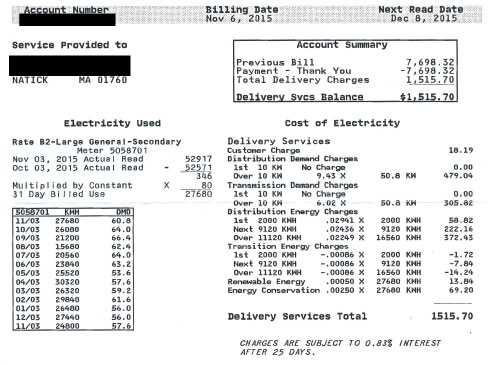 Supply charges on the other hand, are variable costs, dependent on how much electricity is actually consumed. A little known fact: in Massachusetts, consumers can actually choose their power-generating company, as a result of the 1997 Massachusetts Electric Industry Restructuring Act of 1997 (“Restructuring Act”). Under the Restructuring Act, consumers can choose to get their power from a competitive supplier or receive generation from their distribution company (utility). In both instances, the power is distributed via the utility, regardless of competitive supplier.

In the sample bill shown above, the customer has chosen to source power from Hudson Energy Services in New York, while Eversource meters and delivers the generated electricity. If you choose not to select a particular power generator, you are then enrolled for “basic service” provided by the utility.

Together, the delivery and supply charges comprise your total electric bill. After adding everything together, those fractions of cents can add up to a big number - especially during cooler months, when it gets more expensive to generate energy. For those who decide they don’t want to be subject to these utility rates, there is another option - come back to the blog next week to learn more about the benefits of solar, and the positive impact it can have on your electric bill.