Showing Our Thanks by Giving Back

Showing Our Thanks by Giving Back

As Thanksgiving approaches, we are reflecting on the importance of giving back to the community. We have a lot to be thankful for at Solect, and we feel that part of our role as a business is to be a part of—and give back to—our community. Over the years, we have prioritized giving in a number of ways: donating solar systems, volunteering in our local communities, and sponsoring charity events.

We’re Thankful for: Organizations that Make A Difference 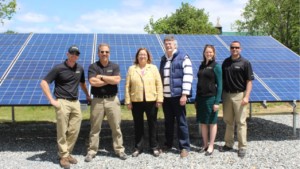 Most recently, Solect Energy partnered with the historic Thoreau Farm, the birthplace of Henry David Thoreau, in Concord, MA to donate a nine-kilowatt (kW) solar energy system. With the installation, the farmhouse was able to break the mold of a traditional museum and take a step forward in evolving into a sustainable, 21st-century attraction. Moving forward, Thoreau’s present day followers can continue to be inspired and educated by his teachings.

Additionally, Solect has partnered with the Michael Linslow Respite Center—which provides emotional and physical support for individuals with disabilities and their families—to donate and install an 11.75 kW solar PV renewable energy system on its roof. The 50-panel array has helped the center to reduce its electricity costs by up to $2,500 per year, which can be put into more beneficial use toward additional services for the individuals and families that it helps. 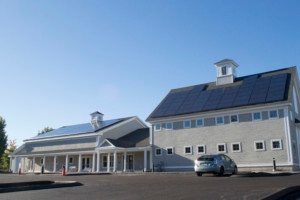 Near and dear to Solect is the Hopkinton Center for the Arts, a nonprofit organization which Solect previously donated a 30kW system to. With the approximately $10,000 a year the organization saves on electricity costs due to the installation of the solar array, the Hopkinton Center for the Arts now has more funds to use toward what really counts – its mission of allowing people to explore the visual and performing arts.

Another organization that Solect values, Be Like Brit, is an orphanage in Grand Goave, Haiti. The “B”-shaped orphanage is a tribute to Britney Gengel, a 19-year-old student from Massachusetts, who was killed during a devastating earthquake while volunteering at a Haitian orphanage in January 2010. Because the orphanage was in need of thousands of dollars a month for electricity, Solect partnered with the orphanage in 2014 to donate a 30 kW solar array, in union with a battery backup system. The system provides 100% of the organizations electrical needs, allowing for Be Like Brit to use more of its donations on child care.

We’re Thankful for: Groups That Fight for a Cure

As a proud sponsor of the Melanoma Foundation of New England, Solect hosts their Running for Cover team every year before the Boston Marathon. We understand the impact of the sun’s rays, and are dedicated to helping raise awareness in order to reduce the melanoma’s prevalence.

In addition to the Melanoma Foundation, Solect is a strong and active supporter of the ALS Association. We continue to support the organization’s Sharon Timlin Memorial 5k race, which raises awareness and ample funds for the research, public education and services to find a cure to Lou Gehrig’s Disease.

With so many organizations (and people in the world) passionate about dedicating their lives to helping others, there is much to be thankful for this Thanksgiving. As we indulge in our turkey and stuffing and enjoy the company of our friends and family, it is important to remember what we are thankful for and the ways in which we can give back to the community with the resources we have. At Solect, we are proud to show our thanks by giving back, and wish everyone a happy Thanksgiving!