It’s that time again – that time of year when both temperatures and electric bill charges are on the rise. Last summer was one of the hottest years in recent history, and it looks like this summer won’t be much different. According to the Farmer’s Almanac, temperatures are “predicted [to be] above-normal for about two-thirds” of the United States this summer, extending all the way from June through October 2021.

As temperatures grow and demand for grid-supplied energy spikes, it’s important to understand just how much increased energy usage during this time can affect your business and its operating costs. In fact, there is one particular hour on one specific day each year during which you should keep a close eye on your organization’s energy usage. That hour is called peak demand. The only problem is, it's difficult to predict when exactly peak demand will occur.

What is Peak Demand?

Peak demand is the one hour during the year when electricity usage across New England is at its highest. This annual peak typically occurs in the late afternoon on one of the hottest days of summer, when more electricity is being used to power an organization’s operations, air conditioning systems, and the like. There are many different names for this hour including, “peak demand,” “I-CAP,” and “CapTag,” but whatever you want to call it, your energy usage during peak demand can have significant long-term impacts on your electric bill – potentially costing you thousands every year. This is because part of your electricity rate is tied to the amount of energy you use during the peak hour. 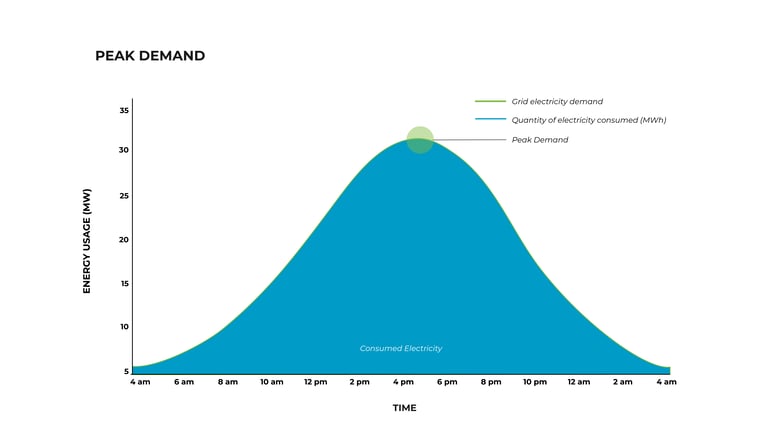 Why Does Peak Demand Exist?

Peak demand is identified by ISO-NE, New England’s independent system operator, which is responsible for managing the energy market in New England. During peak demand, ISO-NE ensures that there is enough energy available to meet the increased demand to avoid brownouts and blackouts throughout the region.

Ideally, businesses would be aware of the peak hour, but because a number of variable factors drive it, such as season, temperature, and consumption, it is hard to predict when the time is near. As the peak hour approaches, reducing consumption during that time is not only beneficial to the grid but also can reduce your electricity costs the following year, potentially by thousands of dollars.

What should you do during peak hours? How can you reduce the charges?

It is important for your business or organization to be prepared to react to peak demand because reducing your energy usage during this period can result in a lower electricity rate for the next year.

The following are great ways to reduce demand charges:

How Do You Know When a Peak Hour Might Hit?

Fill out the form below to subscribe to Solect Energy’s Service Advisories, which will provide alerts of the approaching peak hour based on our monitoring of ISO-NE data.

You can also use one of the following resources to determine when a peak hour might hit and learn more about how to reduce your energy load and participate in demand response programs.

As you can see, there are a number of effective ways to combat peak demand, but preparation is key. Once you understand your organization's electricity usage and daily requirements, you can implement energy-saving practices and proactively plan demand response initiatives to reduce peak demand charges.

To learn more about peak demand, when it might occur, and what you can do to avoid these charges, contact Solect Energy for a complimentary evaluation of your facility.