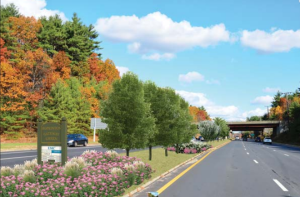 Originally Published in the Hopkinton Independent, May 5, 2016

A rendering of how the intersection of Rte. 495 and West Main Street will look once the Gateway Green Project is completed.

Right now passing motorists can see only new piles of rich earth along the median strip at the intersection of Rte. 495 and West Main Street. But by the end of May, that intersection will be transformed into a beautifully landscaped entryway to Hopkinton – one that welcomes visitors and says “welcome home” to residents.

The Gateway Green Project, financed by more than $120,000 in cash donations, materials and time from dozens of local businesses, is a massive overhaul of that bleak intersection. When the groundwork is complete, the area will be lushly planted with 51 trees, 133 shrubs, and 225 perennial and grass plants.

Peter Mezitt of Weston Nurseries, a major project sponsor and coordinator of the work, said the improvements will bring pleasure to both residents and visitors and economic benefits to local businesses. He credited Ken Driscoll of Solect Energy for the original idea.

“We formed a group and decided that it was a meaningful initiative that would improve the appearance and the impression of Hopkinton when people first pulled off the highway,” Mezzitt said. “The name ‘Gateway Green’ seemed appropriate since this is the gateway or entrance to our town for many people. Enhancing the landscape provides a positive impression of the community and has all sorts of benefits.”

Over the past few weeks crews have been removing 100 cubic yards of weedy topsoil and bringing in 150 cubic yards of organic loam. The groundwork will also include 15 cubic yards of compost amended soils around trees and shrubs, 1400 feet of irrigation lines, and 1200 feet of conduit Makeover underway at 495 interchange for low-voltage up-lighting in the future. Planting will begin May 18 and will be wrapped up by the end of the month.

Mezitt, whose family has been in the nursery business for four generations, said the plants were selected carefully. “They are appropriate for the site because they can take the heat and the salt,” he said. “The trees will grow upright and stay relatively narrow so they do not impede traffic.

Mezitt estimates that labor crews will be spending 15 to 20 days to remove weeds, hook up to the water source, install irrigation, plant and mulch.

He emphasized that the generosity of local businesses is making the transformation possible. “This is a 100 percent privately funded project that costs nothing to the taxpayers of Hopkinton,” he said.