Solar and Schools: Beyond Energy

Solar and Schools: Beyond Energy

The calculus of solar has caught the attention of school administrators, facilities managers and school boards across New England. In this time of lean budgets, the benefit of lowering energy expenditures and redirecting those funds into more student-centric educational activities is too attractive to ignore.

A highly relevant teaching tool for STEM (Science Technology, Engineering and Math) Programs. Many schools integrate their solar system into their teaching curriculums. Some have kiosks that allow students to proactively monitor the solar array and make real world equivalency comparisons on energy saved.

Most schools operate as nonprofit entities and cannot directly take advantage of federal solar tax incentives. However, they can benefit from these policies through onsite power purchase agreements (PPA). PPAs are contracts where solar energy companies finance, build, own, and maintain a system on the customer’s site, selling the solar electricity generated back to the organization at a reduced, fixed rate for an extended period of time (typically 15 to 20 years). Under this model, the school incurs no (or very low) upfront costs and saves money through reduced energy costs. Massachusetts and Connecticut in particular have policies that favor the PPA model.

At Solect Energy we’ve seen the power of solar at work in both public and private K-12 schools and in higher institutes of learning. New facilities such as the recently built Somerset Berkley School incorporated solar into their design plans from the ground up. School ice rinks and sports facilities are often a driver. The high cost of cooling rinks and arenas have prompted schools to look for creative solutions. Finally, we are seeing that once schools experience the benefits of solar, they are eager to expand their solar commitment.

Insights from installations at public, private and higher education institutions: 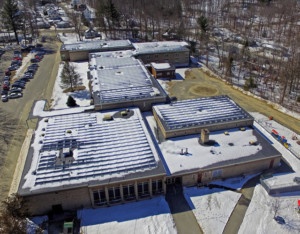 Fitchburg Public Schools recently installed two rooftop solar systems totaling 603 kilowatts (kW) on its Reingold Elementary School and Memorial Middle School reducing their energy costs by more than $40,000 per year.  In addition, the school has taken full advantage of the many educational benefits of solar: hosting a regional Clean Energy Activity Day, featuring solar experts as speakers, and utilizing the monitoring dashboard as an authentic, integrated element of its STEM program. 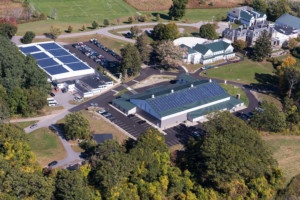 The Pingree School, a private secondary school in South Hamilton, a few years ago installed a 227 kW solar system on the roof of its ice rink. The rink’s high energy costs were nearly cost prohibitive during the hottest months of the year.  After the success of its rink installation, the school was keen to add solar to its new Field House. A 92 kW solar array was incorporated into the initial design of the building.  Now with both arrays Pingree covers nearly 50 percent of its energy costs, and saves approximately $20,000 a year. 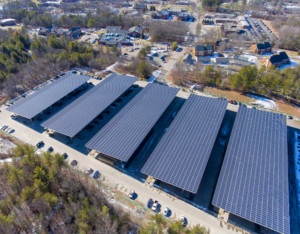 In 2014 Stonehill College installed a solar farm generating approximately 3.24 million kilowatt hours (kWh), amounting to 20 percent of its annual electrical usage. The solar field is estimated to save the College $3.2 million over 15 years. In May 2017 Stonehill completed the installation of 2.8 MW solar canopy system over the vast majority of its parking area. With the new canopies, Stonehill now has 6 MW of solar installed on campus, increasing the total solar energy production to more than 40 percent of the campus’ annual electrical usage. The school has plans for the canopies to provide the added bonus of charging stations for electric vehicles in addition to offering snow and rain protection. 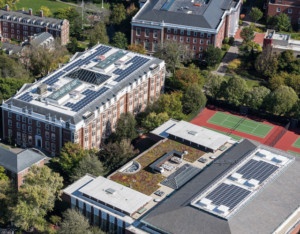 Harvard Business School has analyzed the benefits of solar and deemed it a sound investment. Solect has completed 7 installations on buildings across the HBS campus.  The combined systems amount to over 500 kW,  producing enough energy to charge 3,900,000 student laptops a year.

The math and benefits of solar add up to a compelling equation. With significant cost savings, student enrichment potential, and an overall positive environmental impact, schools should be highly motivated to investigate solar as a viable energy resource.