The Power of Solar Giving

The Power of Solar Giving

Solar power has gained traction as a catalyst for positive change worldwide. Renewable energy from solar is transforming lives in developing countries, such as India; providing access to modern necessities like lights and phone chargers to typically underserved African nations; and helping improve the quality of life of millions here in America. Solect has always put a big emphasis on giving back, reflecting our dedication to the “triple bottom line” of People, Planet, Profit. In the spirit of the holiday season, we wanted to show our appreciation to everyone in our Solect family.

At Solect, we feel that part of our role as a business is to be part of the community that we work and live in. We have done this by donating complete solar systems, volunteering in our local communities, and sponsoring a number of charity events.

Giving the Gift of Solar

One of Solect’s biggest community initiatives is the practice of donating complete systems to members of our community who we believe will benefit most from the systems and savings. One of Solect’s first in-kind donations was an 11.75kW solar system to the Michael Lisnow Respite Center in Hopkinton in 2013. In addition, Solect recently donated a 30kW system to the newly constructed Hopkinton Center for the Arts, which is estimated to save the organization nearly $10,000 in annual electricity costs. By helping these businesses and organizations save on power, we allow them to put that savings toward what matters most - their missions. 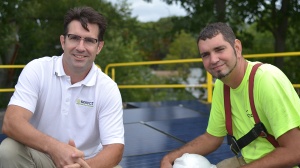 Two Solect employees installing a solar system for the Be Like Brit orphanage in Haiti.

One of our most memorable projects took us much further south than our home in Massachusetts. On September 13, 2014 a team from Solect traveled to Haiti to install a solar system atop the “B’ shaped Be Like Brit orphanage in Grand Goave, Haiti.

The orphanage is a tribute to the spirit of Britney Gengel, a 19-year-old student from Massachusetts, who while volunteering at a local orphanage in Haiti, was killed when a devastating earthquake struck the country in January 2010. Because the costs of building and operating an orphanage are high, Solect and its partners donated the solar PV system to help the orphanage reduce it operating expenses, ensuring that more of the non-profit’s donations can be used to provide care for the children, instead of paying for lighting and HVAC.

We're not the only company who is giving the gift of solar. Solect customers have the option to give excess energy from their installations to those in need, as well. For example, Solect customer New England Resins donates its excess electricity to a nearby Woburn non-profit. Through virtual net metering, the credit generated from excess electricity from the installation at New England Resins is donated and applied to the Woburn Council for Social Concern, allowing the organization to save substantially on their electric bill. 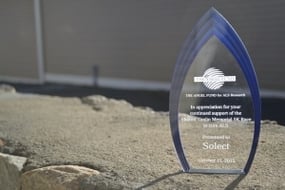 The Angel Fund Award, given October 2015.

In addition to our installation-based giving efforts, Solect is actively involved in a number of local philanthropies, providing both funding and in-kind donations. Solect has had a longstanding partnership with the Melanoma Foundation of New England, partnering on multiple fundraising events, hosting a Sun Safety training for the outdoor and construction worker community, and sponsoring the MFNE’s official Boston Marathon running team, Running for Cover. Together with the MFNE, Solect helps to reinforce the importance of respecting the power of the sun and staying safe while enjoying it.

Solect is also an active supporter of the ALS foundation, and was recently awarded the Angel Fund award for ALS Research in appreciation for the company’s continued support of the Sharon Timlin Memorial 5K race to cure ALS.

A team of Solect employees volunteer on the weekend.

Finally, Solect employees are dedicated to furthering the company’s commitment of contributing to local communities. Solect employees will routinely organize local volunteer efforts and participate in them together outside of company time. Most recently, a crew of Solect volunteers helped to refurbish the Meadows and Shadows Women’s Shelter in Ashland, MA. The event was hosted by one of  Solect’s customers, Faith Community Church, and a Solect employee helped to recruit and organize a team of company volunteers.

Much to be Thankful For

As our stomachs fill with turkey and the colder weather encourages us to pull blankets tighter, we take the time to reflect on the good in our lives. At Solect, we have a lot to be thankful for. We would like to thank our customers for being dedicated to helping the environment via solar energy and acting as advocates and leaders in renewable energy. We would like to thank our team members for working tirelessly to keep Solect growing and keep impacting more people every year. We thank our community for supporting us and helping us to succeed as a small business.  A big thank you to our partners and vendors for providing quality goods and services that allows us to offer the best value to our customers.  And we would like to thank you, our dedicated readers, for being a part of the whole solar story. We couldn’t do it without you.